“You shouldn’t have come here, but I’m glad you did.”

The first Tomb Raider video game released in 1996 to critical acclaim, and has spawned countless video game sequels and three theatrically released films.  The early games in the franchise are known for adventure, fun gameplay, and interesting puzzle design, but the character of Lara Croft has often received both praise for being a strong female in videogames as well as negativity for her misogynistic appearance.  The original two film adaptations, released in 2001 and 2003, starred Angelina Jolie and were critically panned for poor writing and for sexualization of Lara.  In 2013, a video game “reboot” of the franchise released to critical praise for a new, grittier tone.  A loose adaptation of the 2013 video game, Tomb Raider features Alicia Vikander of Ex Machina and The Danish Girl as Lara Croft.

Vikander comes to play ball in Tomb Raider.  She gives a headstrong but dynamic performance as Lara Croft.  Unfortunately, the writing is no match for her.  She holds her own, but she gets very little of interest to say.  She also seems to excel at puzzle solving and archaeology, even though she didn’t receive a university education.  That said, she is definitely smart and determined, and she makes us believe she can hold her own when surrounded by mercenaries.  Counter to her portrayal in the videogame, however, she comes to the island with designs to discover what happened to her father, who was lost on a previous expedition, and doesn’t explain her proclivities for some of the talents she seems to possess.

Walton Goggins portrays the main villain of the film.  In his first exchange with Lara, his character feels disarmingly calm.  He has a sort of menacing suave early on that helps get the conflict going, but it doesn’t maintain.  He quickly loses that biting calmness, becomes singularly focused, and ultimately uninteresting.

The design of the film really emulates the feel of the 2013 video game.  At first it’s a treat, but its welcome wears thin.  It falls into a lot of trappings of video game movies, and doesn’t break any molds.  We constantly get reminded that we are watching an adaptation of a video game, with visuals, angles, and scenarios very reminiscent of video game trends.  She is able to survive accidents that would likely kill most people, such as brawls, falls, impacts, etc., which would be fine in a fun movie.  However, it fails to find its voice and attempts to walk a line between fun and gritty, while largely falling short.  It doesn’t achieve anything fun enough to entertain the average audience or justify Lara’s acts of physical durability, and it fails to wade deep enough into the realistic realm to add anything meaningful to the story.  It puts one foot on the bank and one foot in the creek, and awkwardly hobbles along the water’s edge.  The movie thankfully moves at a brisk pace, but if it wasn’t for Vikander’s excellent performance, Tomb Raider would lost steam early on and never get it back.

It’s certainly an improvement over the bombastic, overly sexual films starring Angelina Jolie, but can’t seem to find it’s own voice.  It’s a mediocre distraction at best, that struggles to find its voice.  Unfortunately, it does not break the mold of disappointing video game adaptations.  Thankfully, Alicia pulls us through with more than enough talent to keep us interested, but the movie frankly doesn’t let her stretch her legs. 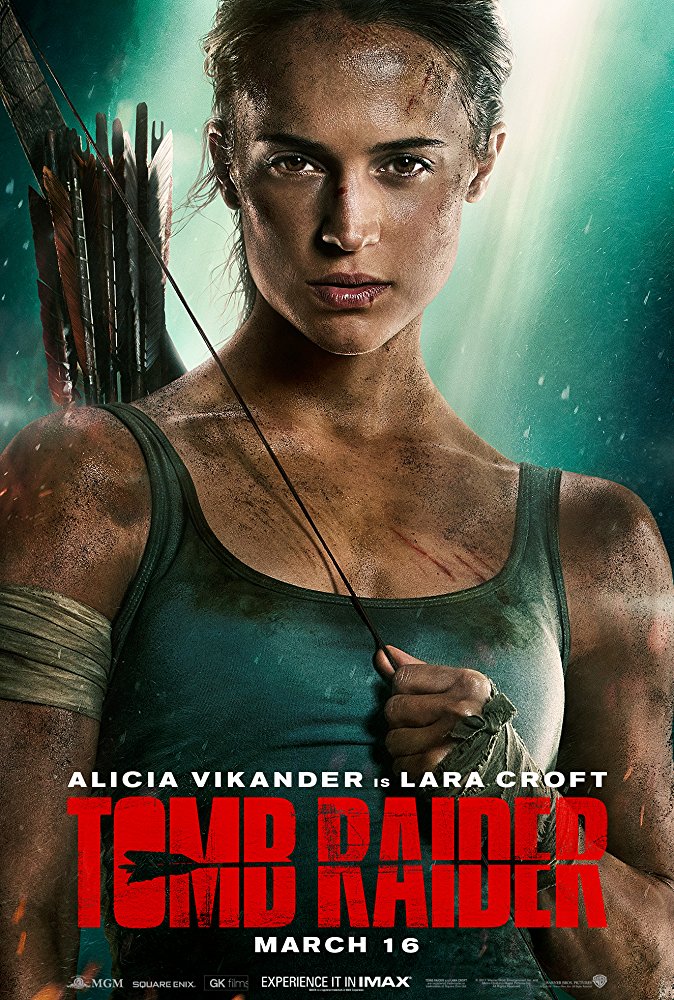