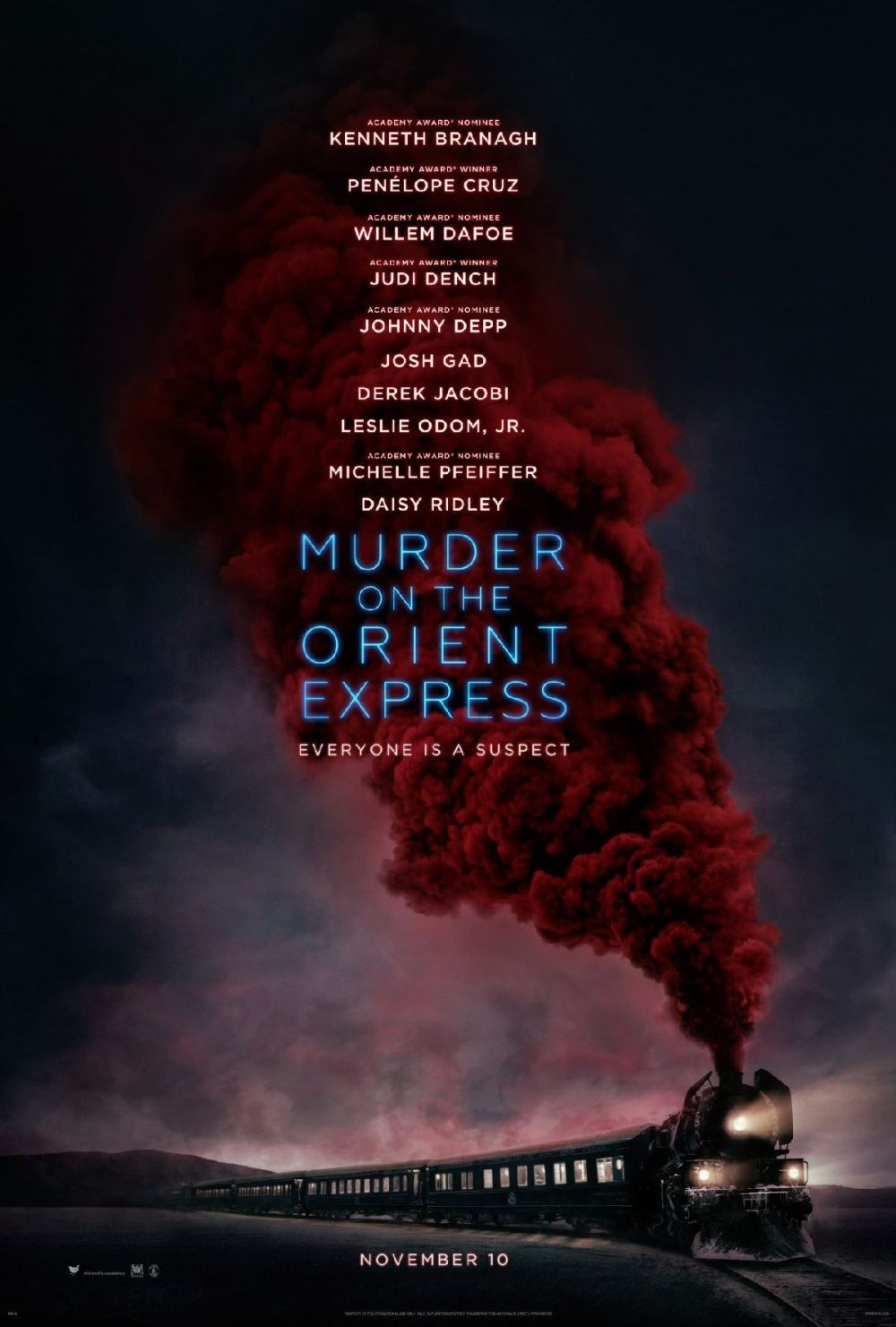 Agatha Christie’s 1934 novel Murder on the Orient Express, featuring the tenth literary appearance of her famous detective character, Hercule Poirot, has been adapted for the big screen once before and several times for television.  The first adaptation, released in 1974 and starred Albert Finney as Poirot, and is a classic of mystery cinema.  Kenneth Branagh brings the English author’s tale of murder and conspiracy back to the big screen, to varying degrees of success.

The quality of the players assembled for Branagh’s Orient Express simply cannot be overemphasized.  In addition to Kenneth Branagh himself as Poirot, showcasing one spectacular mustache, the film features Dame Judi Dench, Sir Derek Jacobi, Johnny Depp, Daisy Ridley, Michelle Pfeiffer, Josh Gad, Leslie Odum, Jr., Penelope Cruz, Willem Dafoe, and others as the passengers of the Orient Express, bound for France.  Eager to take a holiday, Poirot is unfortunately thrust back on the job when one of the passengers turns up dead on the second day of the voyage.

A beautiful film follows that is enjoyable but slight and uneven.  Kenneth Branagh delivers a charismatic and surprisingly, if possibly unintentionally, funny performance as Poirot.  A comic and high-pitched voice flows out from behind that ‘stache, contrasting an intelligent and complicated man.  The resulting performance entertains throughout.

Unfortunately, the film largely squanders most of its remaining, fantastic cast members.  A few of them have their moments, such as Daisy Ridley, Josh Gad, Michelle Pfeiffer, and Johnny Depp.  Each of them has at least a short time to display their immense talents.  Those moments are, however, few and far between.  Some cast members, even some of the most notable, disappear into the woodwork for large sections of the movie and have little to say.  Orient Express criminally under-uses Judi Dench and Derek Jacobi, whose presences could bring a lot of notoriety and gravity to the proceedings.

Branagh’s films always offer fantastic production value, as does this film. Despite its underused cast, Murder on the Orient Express consistently treats the eyes with charming production design and views of breathtaking mountain vistas.  Costume and set design also always impress, and the movie has the feel of a very old-school murder mystery.

Murder on the Orient Express stands alongside Branagh’s adaptations of Shakespeare, Mary Shelley’s Frankenstein, and Branagh’s turn as director of the first Thor film as a beautiful and well-directed film, but its squandering of its incredible cast holds it back from greatness.  It offers little new for those who have read it’s novel or seen the previous feature film.  The movie is a starring venture for Branagh, who again, entertains from start to finish, but he overshadows the wealth of talent that he has asssembled to surround himself.  His direction is always top-notch, and he brings us a mystery in a highly classic style.  The proceedings entertain, but may be ultimately forgettable.